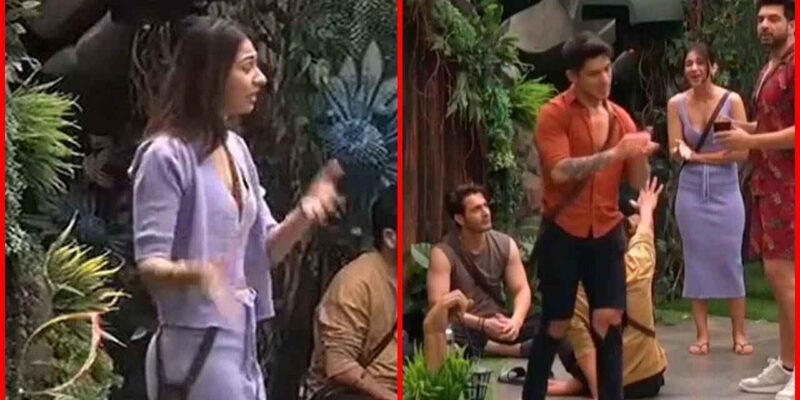 Contestant Prateek Sehajpal, who came into the limelight due to his aggressive behavior in Bigg Boss OTT, is not able to show his flair in Colors TV’s Bigg Boss 15. Due to his strange antics this week, not only did all his strategies succeed but he was also ridiculed fiercely. In today’s episode, Prateek Sahajpal is going to break the door latch of the washroom in Garden area. But Prateek will break the latch when Vidhi Pandya, the female contestant of the show, is taking a bath inside.

Seeing this act of Prateek, Vidhi will come out of the washroom and ask him the reason for this. When Prateek refuses to accept his mistake, then he will be seen complaining about his action to Karan Kundra, Vishal Kotian, Jai Bhanushali and other contestants. In the promo shared by Colors TV, we can see Vidhi telling Prateek, “Why would you do this when someone is taking a bath?” During this, Vidhi is seen very angry in the video.

Tejashwi Prakash is also seen supporting him in this fight of law. In the video we can also see that Tejashwi tells Prateek that even though her intentions were right, it is not right to do something like this. He says that, “This thing is too scary for any girl.” Prateek ignores her even when the family members ask such questions. He says that he does not care whether anyone is inside the washroom or not. He is just playing the game.

Karan Kundrra will be seen getting quite annoyed with Prateek’s reply. Actually, Karan was Prateek’s mentor in a reality show of MTV. That’s why Prateek respects him a lot. Therefore, seeing this attitude of Prateek, Karan will be very angry on him and he will give him a warning and say, he should not behave like this with a girl in future. But Prateek will ignore this warning as well. He will say that he does not care about all these things. Not only this, he will not even apologize for this.

Also read: Super Dancer Chapter 4 Grand Finale: Tomorrow is the finale of Shilpa Shetty’s show, know when and where you can watch Super Dancer

Gauri Khan Net Worth: Gauri Khan’s wife is the owner of crores of assets

Big news for those who have account in SBI! Banking service will not work for so many hours in the festival season, know why and when

Today Tata will have Air India! Government will announce in the evening