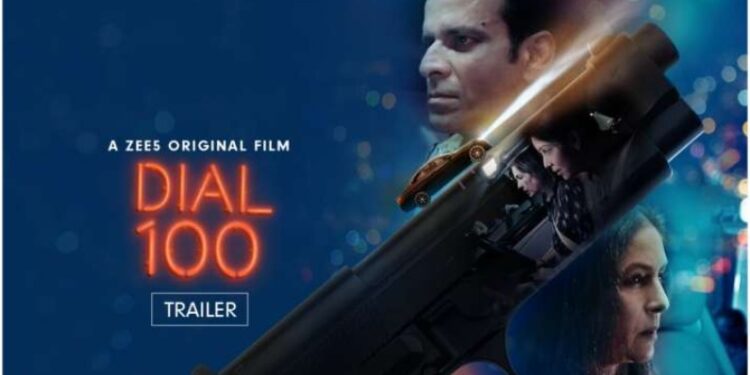 The trailer of Dial 100 starring Manoj Bajpayee, Neena Gupta and Sakshi Tanwar is out, the film will premiere on 6th August on ZEE5

ZEE5 has now released the trailer of its much awaited original film, Dial 100. The fans of Dial 100 starring Manoj Bajpayee, Neena Gupta and Sakshi Tanwar were waiting for a long time. Dial 100 Pictures Films India is produced by Sidharth Malhotra and Sapna Malhotra’s Alchemy Films and directed by Rensil D’Silva.

Let us tell you that the premiere of the film will be on India’s largest domestic OTT platform ZEE5 on 6 August. For the first time in the film, Manoj will be seen in a completely different character.

Know how is the trailer

The trailer begins at the Police Emergency Call Centre, where Manoj Bajpayee’s character Nikhil Sood receives a call from a woman who is mourning the loss of her son and is now on a mission to get justice. The woman in question is Seema Palwa, the character of Neena Gupta who has never been seen in a gray avatar before.

On the other hand, Sakshi Tanwar plays an important role in the film as the wife of Nikhil Sood (Manoj Bajpayee), who also gets caught in this mess. The trailer creates suspense and leaves many questions unanswered.

What is Seema Palwa (Neena Gupta’s character) planning to do with the gun, why is she threatening Nikhil Sood to help her take revenge and how does Nikhil Sood get himself out of the situation?

Talking about the trailer, Manoj Bajpayee shared, “It is a unique film with lots of twists and turns that will keep the audience hooked till the end. I feel very excited about the fact that the announcement itself has generated so much interest and enthusiasm. I can’t wait for everyone to watch the film on ZEE5!! Dial 100 was an experience for me and I am sure the audience will feel the same after watching it.”

Neena Gupta shared, “This character is something I have never played before, and I am thankful to Rensil for giving me this opportunity. Even though the film comes out in just one night, it is packed with plot twists, drama, revenge and murder for an entertaining thriller.

What does Sakshi Tanwar have to say

Sakshi Tanwar says, “I jumped at the opportunity to work with Rensil sir, Manoj sir and Neena ji because it is a dream team. I had a great time shooting for this film and I am sure the trailer will make the audience more anticipating. So, get ready to watch this nail-biting suspense thriller on ZEE5 on 6th August.

“When we film a story that revolves around just one night, we have to make sure that there is never a dull moment. Dial 100 promises this from start to finish – an entertaining thriller with scintillating performances, a compelling narrative and some powerful moments. I am glad that I was able to bring it all together in the form of Dial 100 and I look forward to the premiere on ZEE5 on 6th August”, said director Rensil D’Silva.

how will the film be

The story unfolds in one night and warns the audience how one phone call can turn everything and everyone’s life upside down, where Manoj Bajpayee will be seen in a race against time to save his family. On the other hand, Neena Gupta will be seen in a dark role where her character is ready to go to any extent to avenge the death of her son.

Also read- Throwback: When Sushant Singh was thrown out of the hostel for the whole semester, the actor told the reason

EXCLUSIVE: Gehna Vashisht said – Sunny Leone is given work by Mahesh Bhatt in films and people like us…