Aamir Khan and the team of ‘Lal Singh Chaddha’ were accused of spreading pollution, video went viral from the set 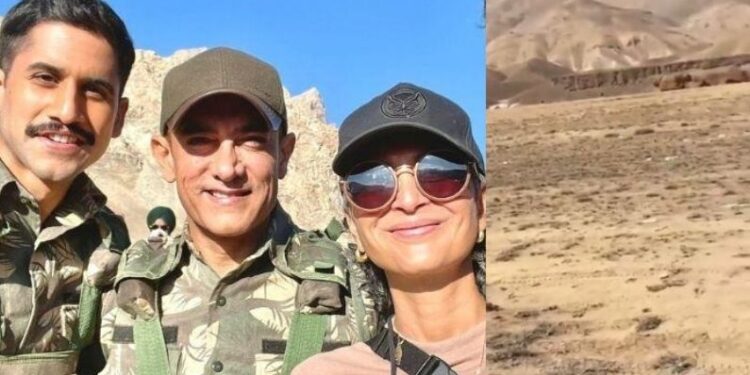 Aamir Khan is shooting in Ladakh these days with the entire team of his film ‘Lal Singh Chaddha’. The actor has arrived here to complete his 45-day long schedule. In such a situation, his entire team is accused that the film team is spreading pollution in Wakha village of Ladakh.

Bollywood actor Aamir Khan is currently shooting for his upcoming film Laal Singh Chaddha in Ladakh. Aamir Khan has reached here with his entire team, where his ex-wife Kiran Rao is also present here with him. Meanwhile, the team of the actor’s film has been accused of spreading pollution in Ladakh. The team of ‘Lal Singh Chaddha’ is shooting for the last schedule of this film here. In such a situation, some special videos from Ladakh have gone viral, in which the team of the film has been seen spreading garbage.

A video has surfaced on Twitter, which is near Wakha village in Ladakh, in this video the user has shown us that the team of the film is constantly creating a pile of garbage around the set of the film. Where garbage items and many plastic water bottles have been thrown everywhere. By watching this video, it is clear that the team of the film is working very fast to spread pollution here. Posting this video, the user wrote in the caption, “This is a very special gift from the team of Aamir Khan’s upcoming film Lal Singh Chaddha to the villagers living in Wakha.”

Video of pollution came from the sets of Lal Singh Chaddha

This is the gift Bollywood star Amir Khan’s upcoming movie Lal Singh Chada has left for the villagers of Wakha in Ladakh.
Amir Khan himself talks big about environmental cleanliness at Satyamev Jayate but this is what happens when it comes to himself. pic.twitter.com/exCE3bGHyB

He further wrote in his caption, “Aamir Khan himself talks big about cleaning the environment in Satyamev Jayate, but when it comes to himself, it is the same.” Aamir Khan’s team is here on a 45-day long schedule. has come for. Due to which the villagers here are feeling very disappointed after seeing all this. This video about the actor is becoming increasingly viral on social media. Where many users are also demanding action against it.