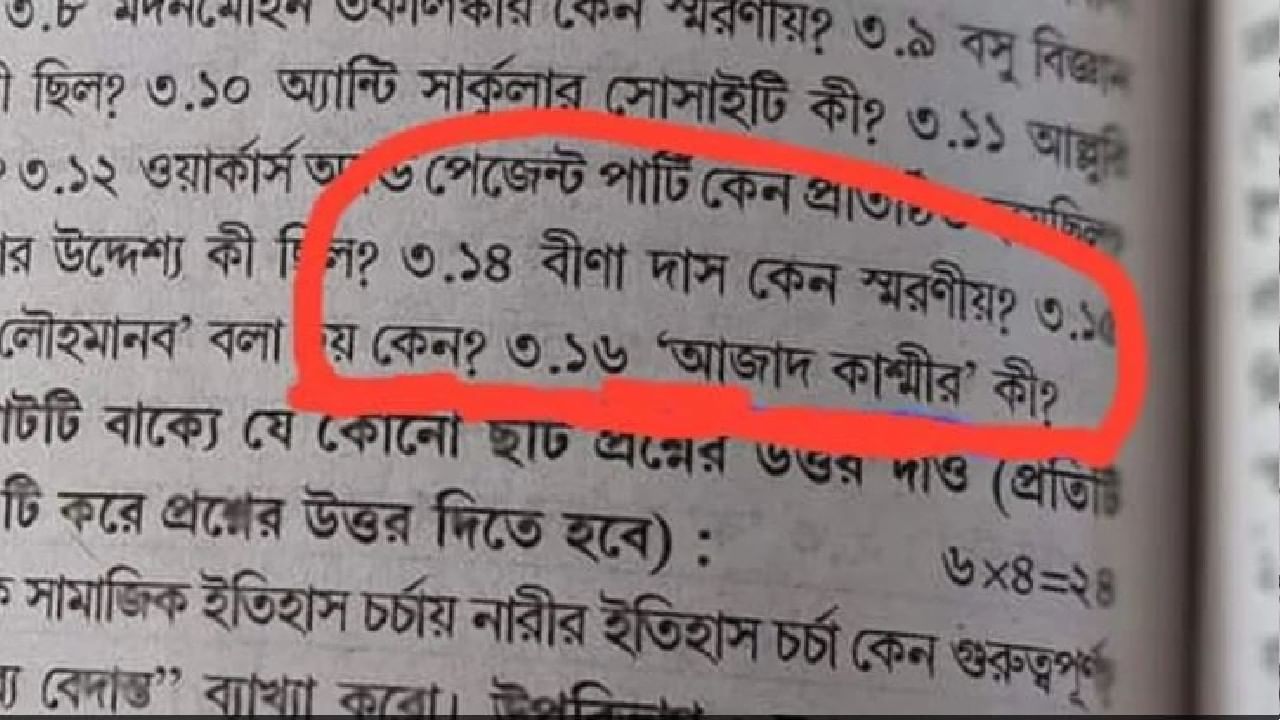 In West Bengal, the controversy regarding the question asked about Azad Kashmir in the 10th class test paper is not taking the name of stopping. After the test paper of the Board of Middle Education, now the same questions have been asked in the test paper of ABTA.

again in West BengalAzad Kashmir‘ Questions have been asked about. After the Central Education Council, the same question of ABTA test paper I also got to see. Left Teacher’s Association ABTA This question has been asked in the secondary examination paper of The question in that test paper is, ‘What is Azad Kashmir?’ If you answer correctly, you are allotted 2 marks. As soon as its strong criticism started, ABTA has also accepted its mistake. before this Board of Middle Education In the exam paper, it was asked to mark ‘Azad Kashmir’ on the ‘outline map of India’, about which there was a dispute.

Although the secondary board has also accepted its mistake. ABTA also made the same mistake this time. He admitted the mistake but claimed that it was mentioned in the book which had got the board’s approval.

ABTA state general secretary Sukumar Paine said, “There is a question in our test paper that what is Azad Kashmir. This question is of 2 marks, but Azad Kashmir is also there in our board’s syllabus. It is also in the government approved book, when it is in the syllabus then the question is for the asker. The board should have known when it made the syllabus, but I would say, since it is a controversial topic, it is better not to happen. Questions need to be more careful in future.”

Swapan Mandal, general secretary of the Bengali Teachers and Education Workers Association, said, “I have heard that the ABTA test paper has questions about the disputed part of Kashmir, which Pakistan calls Azad Kashmir. We think it is wrong because no one in our country says Azad Kashmir. UN also does not say Azad Kashmir. Mistake is mistake. However, Swapan Mandal also blamed the Madhya Shiksha Parishad for this ‘mistake’. In his words, Azad Kashmir is written on one page of the book, in which the approval of the Central Board of Education has been received. Although not written in the main text, Azad Kashmir is written in the footnotes. Let us inform that even before this there was a dispute in Bengal regarding this. After that the board asked for clarification and talked about amendment in it.