CBSE 12th Private and Compartment students raised the demand to cancel the examination, said- why discrimination between regular and private students? 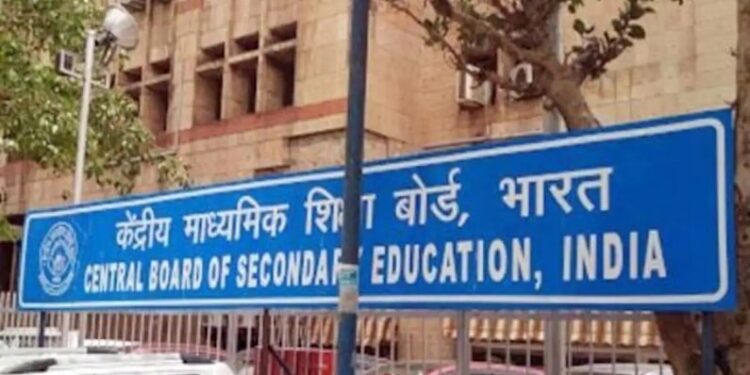 CBSE Board Private/Compartment Exams: Students of private/correspondence and second compartment are demanding cancellation of class 12th examinations. Students are tweeting with the hashtag #helpCBSEprivatestudents.

There is a protest against CBSE’s 12th private and compartment exams.

Most of the board had canceled the 10th and 12th examinations this year due to the corona pandemic. After the decision of CBSE to cancel the 10th, 12th exams, the boards of most of the states did the same. However, CBSE had canceled the examinations only for regular students. Examinations are to be conducted for private/correspondence and second compartment students. Students of private/correspondence and second compartment say that their examinations should be canceled like regular students, it is unfair to them. Students say that when the regular examinations were canceled, they had mailed to CBSE, whether the private examinations have been canceled or not, the students get a reply from CBSE’s controller of examinations Sanyam Bhardwaj in the mail that All exams have been cancelled.. 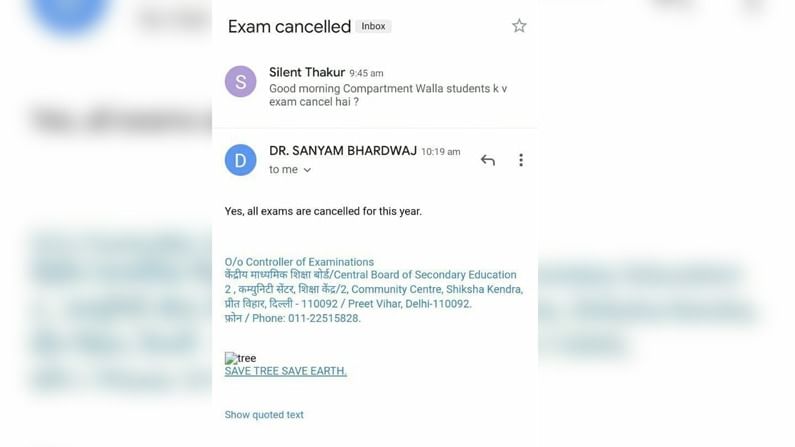 But when CBSE released the evaluation policy for class 12th, it was given in its circular that the examination of private/correspondence and second compartment students will be conducted after the situation of corona epidemic improves. Private/correspondence and second compartment students are now running a campaign on Twitter to get the exam canceled. The students tweeted with the hashtag #helpCBSEprivatestudents on Tuesday and Wednesday. On Tuesday, more than 2 lakh tweets were made with this hashtag. 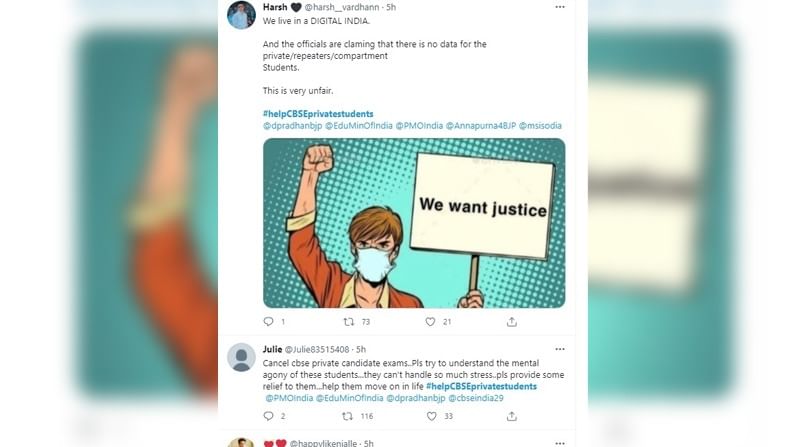 Parents Association has come forward to help CBSE students. NCR Parents Association founder Sukhpal Singh Tour and his associates reached the Ministry of Education on Tuesday. There he submitted a letter to the Union Education Minister Dharmendra Pradhan, in which all the problems and demands of the students have been given. 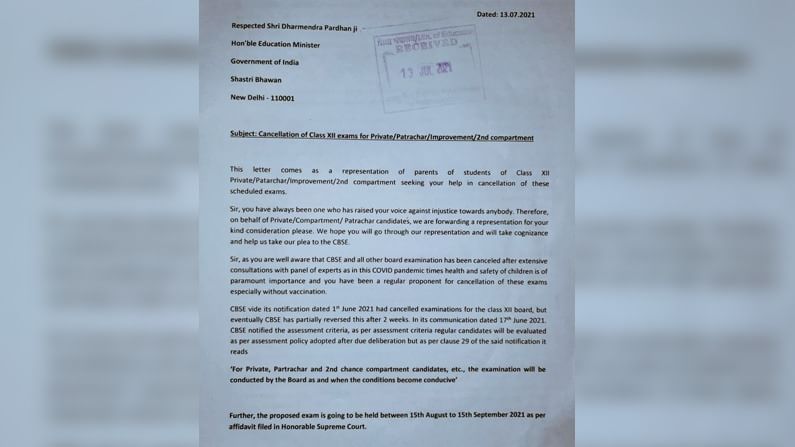 (Letter to the Minister of Education)

Shreya, a student, said in a conversation with NewsNCR, “The respected Prime Minister of our country, Shri Narendra Modi, had announced on June 01, 2021 that the CBSE 12th examinations are canceled in view of the health of the students. The Prime Minister believed that the future and health of the students is most important. Prime Minister’s decision brought a smile on the face of a section (regular) but a section (private) is deprived of that smile till date. The Hon’ble Supreme Court in the case of Writ Petition (Civil) No. 522/2021, Mamta Sharma Vs CBSE, had directed CBSE to evolve an evaluation methodology by June 17. In response, CBSE constituted a 13-member higher committee, after much deliberation, that committee developed an evaluation method for 12th, according to that evaluation method, 10th board, 11th and 12th school based examination for 12th regular students. But ironically, under serial number 29 of the same evaluation, the examination is proposed for private/correspondence and second compartment students and this examination is to be held from 15 August 2021 to 15 September 2021. There is a right to equality under Article 14 in our constitution. If the examinations have been canceled due to Corona, then it should be canceled for the private ones as well. Emergency situation is for everyone, are private students not human or they are not afraid of corona? Why the discrimination between the regular people and the private ones?

Karthik, a student, says, “While regular students are busy preparing for competition and higher education, private students are worried about what will happen to their future. Many entrance exams like NEET-UG, CLAT, JEE-Mains are proposed in the coming days. Something like NEET-UG is to be held on 12th September. Now these students should prepare for entrance exam or board exam. There are also many such students who have enrolled to study abroad and they have to register their attendance with their documents on or before 15th August, but due to lack of examination results of those students they are deprived of enrollment. can be. Students have also deposited huge fees there, this is a very serious issue. In the interest of the students, the government should take a decision to cancel the examination of private/compartment/correspondence students at the earliest.

Ratnaprabhuri, a student says, “The rationale behind CBSE’s decision to conduct examinations for private/correspondence and 2nd compartment students is that they do not have records of private/correspondence and compartment students, but CBSE does a better job of this. Be aware that the records of all these students are available with them, for example, students with compartment pass up to 4 subjects, and most of the students with fail or essential repeats also pass for two to three subjects, and moreover these students’ practicals. /Internal marks are also there and all these students have also done 10th class then how is CBSE presenting the argument that they do not have the data of these students, evaluation for these students on the basis of their performance in the previous classes The method can be developed and promoted.”

Also read: China did not allow the return of foreign students, the future of 23 thousand Indian MBBS students in trouble