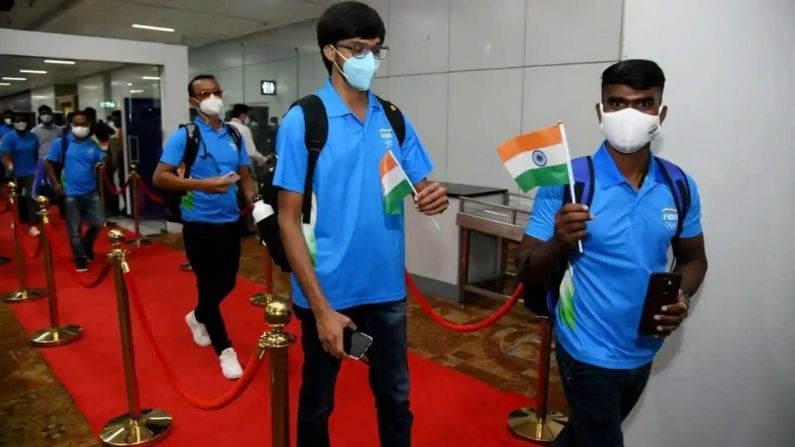 According to the Tokyo Olympic Protocol, the players were subjected to antigen test daily and RT-PCR test was done on coming positive. Players are also required to leave Tokyo within 48 hours of the completion of their competition.

India had sent its largest contingent so far for the Tokyo Olympic Games.

The Government of India gave a big relief to the players, officials and media who went to play in the Tokyo Olympics 2020 on 25 July. The government said that people going for the Olympic Games will not be required to show a negative report of the Corona RT PCR test before leaving the Japanese capital. The decision was informed in an official letter by Lav Agarwal, Joint Secretary, Ministry of Health and Family Welfare. Earlier, Indian Olympic Association President Narinder Batra had requested the government that the Olympic team has been vaccinated and regular corona tests were being done in Tokyo, then they should return home with a negative report of RT PCR test. Exemption from showing.

The Health Ministry official, however, said that only those persons would be allowed to board the flight, who test negative for saliva before leaving for India. Apart from this, all those returning from Tokyo will be re-tested on their arrival in India. In this letter sent to the Sports Ministry, it was written, ‘Only those persons will be allowed to board the flight who will not have any symptoms of the disease. However, the team will be re-tested on their return and after giving their samples, they will be allowed to leave the airport on the condition that they will have to self-monitor their health for 14 days.

Earlier, in a letter to Sports Secretary Ravi Mittal, Batra said, “On coming from abroad, it is necessary to show a valid RT PCR test report before entering India.” This also applies to people coming from Japan. I request that players, officials, IOA representatives, NSF officials and media returning from Tokyo be exempted from this.

According to the Tokyo Olympic Protocol, the players were subjected to antigen test daily and RT-PCR test was done on coming positive. Players are also required to leave Tokyo within 48 hours of the completion of their competition. Batra has requested the government to ask the Japanese government to allow the Indian team to leave without a corona test. The weightlifting team including silver medalist Mirabai Chanu will leave on Monday. Batra said that Air India, Vistara, All Nippon Airlines and Japan Airlines flights will come from Japan. He also requested these airlines to allow Indian crew to travel without RT PCR report.

read this also: The story of the unique gold medalist of the Tokyo Olympics, from a nurse to a pair of siblings and an 18-year-old swimming champion