Made-in-India Maruti Swift lags behind in terms of safety, gets 0-star rating in crash test 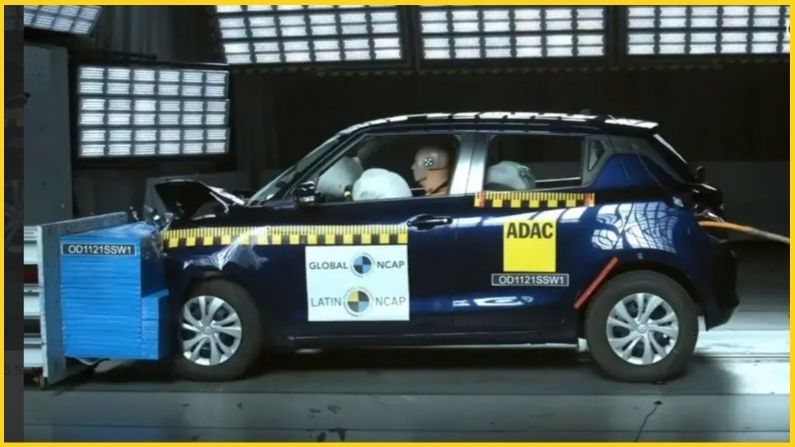 Latin NCAP says the 0 star result for the Maruti Swift is due to poor side impact protection and an open door during testing. Apart from this, the car also has shortcomings in many safety features.

The Latin New Car Assessment Program or Latin NCAP recently crash-tested the Suzuki Swift sold in the region and got a zero-star rating from the safety watchdog. The most important thing is that the car tested by Latin NCAP has been made at the Maruti Suzuki Motor Gujarat Manufacturing Facility, that is, it is a Made-in-India car. The car got 15.53 percent rating for adult occupant protection, while it got 0 percent rating for child occupant protection.

The car scored a good 66 per cent for pedestrian safety and vulnerable track users, though the rating fell again to 7 per cent with respect to the security assistance system. In its report, Latin NCAP says, the 0 star result is due to poor side impact protection and an open door during testing. The car’s whiplash score was also due to lack of UN32 for rear impact testing, lack of standard side head protection airbags, lack of standard ESC and Suzuki’s decision not to recommend CRS for testing.

The Latin NCAP also said that opening the car door would not pass the UN95 regulation requirement. The watchdog reported that the Swift is sold in Europe with 6 airbags and Electronic Stability Control (ESC) as standard, while the model in Latin America is not offered with side body and head airbags and ESC standard.

Customers must get the Kobasic safety feature

Latin NCAP general secretary Alejandro Fures said, “Basic vehicle safety, which is standard in mature economy markets, is a right that Latin American customers should claim without paying extra for them. These safety features act like a vaccine for road accidents. Customers have the right to get the vaccine supplied elsewhere without paying more for it”.

Maruti Suzuki India and especially the Swift has a checkered history when it comes to crash testing. The previous generation Maruti Suzuki Swift initially achieved a 0-star safety rating in the Global NCAP crash test in 2014. At that time, the base variant did not get airbags and ABS as standard. Later, when the current third-generation Swift was introduced, the European-spec model was crash-tested by Euro NCAP, earning a 3-star safety rating from the European watchdog. The standard variant of the Swift got a 3-star rating, while the variant equipped with the optional safety pack got a 4-star rating by Euro NCAP.

That being said, after the model was launched in India in 2018, Global NCAP again crash-tested the India-spec model and this time the new-gen Swift got 2 stars for adult occupant safety. GNCAP had said that the car falls short on adult safety. The model tested by GNCAP in 2018 came with dual airbags with ISOFIX anchorages, seat-belt pre-tensioners but doesn’t offer 4-channel ABS which is one of the main reasons why it got a poor rating.

Kotak Mahindra Bank reduced MCLR for one year, know why this news of relief is for you?

The story of the automotive, which as soon as overtook Ford, then the enterprise was lowered to India